Start here to learn more about us.

The Chanters is a group of Nobles who love to sing. Throughout the year they sing at numerous events, compete in several contests . If you are interested in joining or attending a meeting please contact us. 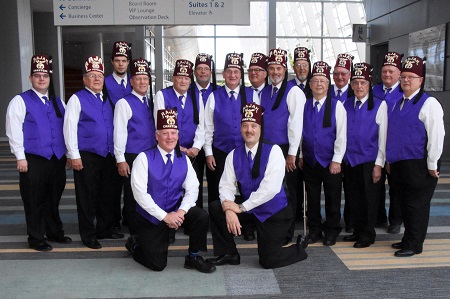 A Brief History of the Chanters Warren J. Blatt

The Rajah Chanters is the only choral music group within Rajah Shrine.  It was organized in 1945 when Noble Jack Mumma was the Illustrious Potentate of Rajah.  Early records indicate there were approximately seventy singers - a combination of Shrine Chanters and the Consistory Choir members.  Most of the singing was done in conjunction with the Shrine ceremonials and Consistory reunions.

There was a succession of directors of music for the next four years.  Nobles Bernard Leightheiser, Dennis Sharman, Willis Frankhouser, and James Matz all directed the Chanters for short periods of time.  It was during the short time that Noble Matz was director, that Rajah Chanters began to emerge as a competitor in the Mid-Atlantic Shrine Chanters Associations.  However, because of professional conflicts, Noble Matz was unable to make a long term commitment as musical director.

In 1985, Harold Kremser assumed the duties of Director of Music.  Hal was a music teacher, retired from Tulpehocken School District, and was on the instructional staff at Berks Campus of Penn State University.  He was a noted musician in Berks County and beyond.

Under Hal's leadership, the Rajah Chanters have become a premier chanter unit in the Mid-Atlantic Shrine Chanter Association.  In the beginning of competition there were several years of embarrassing infractions of the rules; but each time the Chanters had more determination to succeed.  And successful we have become.  Since 1989 Rajah Chanters have won top honors in every year except one.  It was in 1992 that Rajah Chanters set sights on greater accomplishments by entering the Shrine Chanters Association of North America (SCAONA) Competition in Orlando, Florida, and winning third place in that competition.

This accomplishment whetted the appetite of Rajah Chanters to strive for higher goals.  For some years the distance to travel for the Imperial competition of SCAONA had been a deterrent.  However, on July 1, 1995, Rajah Chanters went to Indianapolis, and competed with the big chanter choruses of the mid-west.  In an exciting competition, Rajah missed winning the top award by a mere 1.7 points- and didn't even get third place.

When Noble Bruce Rohrbach became Asst. Director and Accompanist, Rajah Chanters have become even better, and more versatile.  Bruce is an accomplished musician, organist, composer, and arranger.  The critiquing by Ruth Ann Rissinger, a retired vocal music instructor, gives Rajah Chanters leadership unsurpassed by any Chanter Unit in North America.  This has been evidenced by improved competition performances in 1996 in New Orleans(2nd), 1997 in St. Louis (1st) and in 1998 in Orlando (1st), all in the Festival Division (small groups) of SCAONA.

Plans to compete in Dallas in 1999 had to be cancelled because too few chanters were able to make commitments to travel that distance.  Rajah traveled to Boston in 2000 for the Shrine Imperial Session and competition there.

The first "Afternoon of Music" to benefit Shriners Hospitals for Children was performed in 1991.  Since that time Rajah Chanters have contributed nearly $100,000.00 as a result of those annual concerts.

Rajah Chanters have come a long way in 55 years; from a few Shrine andSinging Chanter Consistory appearances to dozens of appearances a year which have taken the Chanters from New England to Florida, and from Atlantic seacoast to beyond the Mississippi.